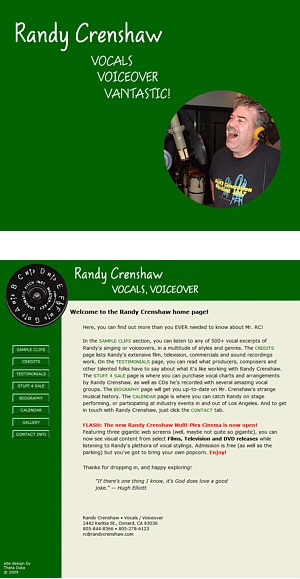 Randy Crenshaw is one of the busiest studio session singers in L.A. Though you probably don’t know him by name, you’ve probably heard his voice either singing or speaking solo, or as part of an ensemble in countless commercials, songs, television shows, movie soundtracks, cruise ship variety show soundtracks, at the Academy Awards, at Disneyland (both live and through the speakers installed throughout the parks) and even as the singing voice of Homer Simpson! Randy also has the uncanny ability to sound like other famous singers, over 160 of them to be more exact, and so when you think you’re hearing James Taylor, maybe it’s not JT. Needless to say, when Randy needed a website to showcase the thousand or more credits to his name, we got the call. It also helps that Randall Michael Tobin has worked with Mr. Crenshaw since the 80s, recording jingles for Coca Cola and other interesting projects. Randall designed Randy’s first website (two screens shown here) which featured a funny Flash opening with a spinning pitchpipe (Randy is famous for being able to play sophisticated tunes on the pitchpipe) which gave way to more animation of Randy’s name, the 3 Vs and a quick shot of him which spins away into the distance. As fun and engaging as the opening was, once Apple dropped support of Flash on their devices, all visitors would see when logging on to Randy’s website was a black screen. Not funny. The idea of upgrading Randy Crenshaw’s site to be mobile friendly, and dropping all the Flash-based technology which powered ALL of the audio jukebox players and video players on the site, was tough to confront. But it had to be done.

Over the course of several months, the site was designed, new non-Flash technology researched and tested, and all content converted into formats designed to work with today’s HTML 5 standard. Although we could use the text and photo content from the original website, all of the media players had to be coded newly. But in the end, the site is a testament as to what can be done when the requirement is to present so much content and have it be easily accessible by category, genre, etc. In addition to Mr. Crenshaw’s vocal acumen, he’s also a gifted vocal arranger and publishes his sheet music for singers of all levels to purchase and perform. There’s also a CD Store section featuring Randy’s catalog of recorded works with various vocal ensembles. All of these needed to be processed through a special E-commerce system we implemented for this purpose. It’s possible one could spend a few days reading, watching and listening to every piece of content on the site, and still not cover it all! To date, Randy Crenshaw’s website ranks as one of the most extensive projects we’ve ever done at Theta Media Group.

Though we lost the Flash animation of the previous site’s opening page, we kept the short pitchpipe tune which plays only once when you first visit the site. It sets the tone for the sonic adventure that lies just a click or two away. Randy was most appreciative of the new site and sent us this:

I’ve been extremely pleased with the great work done by Randall Tobin to carefully hand-craft my new website. From the time the original simple little concept for the website morphed into a giant, potentially untamable monster, Randall calmly helped sort out and overcome all of the various technical and artistic hurdles, making something that was actually far better than what I had originally envisioned. He kept the website simple, streamlined and user-friendly, yet content-rich and versatile, and best of all, let it reflect my own personality. I couldn’t have asked for more in a web designer and audio engineer! Huzzah!

By now, you’re probably dying to check out Randy’s website. Better grab a cup of coffee or tea, you might be a while… 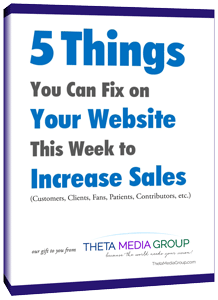 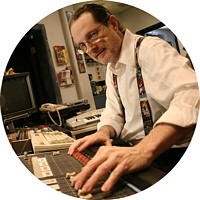 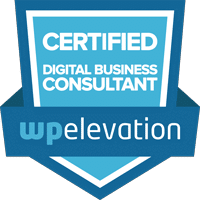